Our Research Affiliate Andrea Peto received the University of Oslo’s Human Rights Award for her defense of academic freedom and institutional autonomy on December 5 in Oslo, Norway, during the Oslo Peace Days celebration.

The award is given annually for personal efforts and active involvement in one or more areas related to human rights issues in a broad sense. 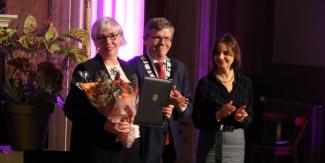 “Andrea Peto is a fearless defender of academic freedom and institutional autonomy. With her connection to gender studies and Holocaust research, she represents disciplines that come under attack when European regimes move in a more authoritarian direction. Academic freedom is fundamental when important human rights are to be protected,” said Pro-Rector Ase Gornitzka from the University of Oslo, who is chairing the prize committee.

Andrea Peto teaches at the Department of Gender Studies at Central European University, Vienna, Austria, and is a Doctor of Science at the Hungarian Academy of Sciences. She conducts courses on European comparative social and gender history, gender and politics, women’s movements, qualitative methods, oral history, and the Holocaust. She is also a Research Affiliate at CEU Democracy Institute.

“When in 2017 Hungary amended its national higher education law to restrict academic freedom for CEU, our university relocated to Vienna to be able to continue its teaching activities. Thus, we have a first-hand experience of defending university autonomy, academic freedom and upholding democracy under an authoritarian or soft-authoritarian government,” said CEU President and Rector Shalini Randeria. “CEU’s mission lies in the service of democracy, social justice, equity, academic freedom, rule of law and open society. We are proud that our faculty are internationally recognized for their work. Andrea’s work on memory studies and history of the Holocaust is a much-needed contribution. The critical gender perspective is needed to successfully resist hijacking the memory of the Holocaust by illiberal forces,” Randeria added.

“I am honored to receive this award for academic freedom as illiberal regimes are weaponizing education and knowledge for their political aims,” said Professor Andrea Peto after receiving the news of her award.

Watch a video with her about the importance of the award: