Dorottya Redai Named Among 100 Most Influential People in the World

We are proud to announce that TIME named our Research Fellow Dorottya Redai to the 2021 TIME100, its annual list of the 100 most influential people in the world.

The full list and related tributes appear in the Sept. 27 / Oct. 4 issue of TIME, available on newsstands on Friday, September 17, and now at time.com/time100. The list, now in its eighteenth year, recognizes the impact, innovation and achievement of the world’s most influential individuals.

Redai is the coordinator of the Hungarian book project "Fairyland is for Everyone" (Meseország mindenkié), published by Labrisz Lesbian Association in 2020.

After receiving extreme negative reactions from far right and governmental politicians in Hungary, the book became a great success and a symbol for protest against oppression, discrimination and against governmental policies discriminating LGBT+ people. The book also directed international media attention to the worsening legal and social situation of LGBT+ people in Hungary.

The volume contains 17 fairy tales by 17 contemporary authors with diverse characters from various marginalized or disadvantaged groups. The stories, based on well-known fairy and folk tales, address a number of 'taboo' or 'sensitive' issues, including same-sex love, gender transition, child adoption, child neglect, partner violence, death of a parent, social exclusion based on 'difference', and transgressing gender stereotypes. The book aims to help parents and teachers talk about such topics with children aged 6-12. Since its first publication in September 2020 "Fairyland is for Everyone" has been sold in over 30,000 copies and will be published in 8 European languages next year.

“Being included in the TIME100 list is a great honor for me and Labrisz, because it means international acknowledgement of the enormous work devoted to this project,” said Redai regarding her inclusion in the TIME100 list. “It is a great encouragement to continue in the face of the extremely hostile political environment we are currently living in. It sends the message that what we are doing is very important, and I hope it will inspire other activists in the region to continue working on LGBT+ issues even if it is hard, exhausting and sometimes seems scary or hopeless.” 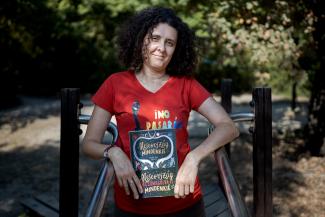 Redai received the Emma Golden Snowball Award in 2020 for her activist and academic work, and the Hatter Award in 2021 for her work for the Hungarian LGBT+ community. Her current research interests include gender equality in education, childhood politics, anti-gender movements, the restriction of LGBT+ rights and democratic backsliding in the CEE region.

Dorottya Redai obtained both her MA and PhD degrees in Gender Studies at Central European University (CEU). She has worked as a researcher and coordinator in a number of EU-wide projects in the fields of gender and labour, and gender and education, and she used to teach in the CEU Roma Access Programs and at CEU’s Department of Gender Studies. Currently, she is a Research Fellow at the CEU Democracy Institute, working in the Gender Equality Academy and EDUC projects. She also works in various projects with other Hungarian NGOs and universities.

“CEU means an intellectual home for me, a vibrant environment with like-minded and supportive colleagues who are doing great things in their own fields. In the increasingly hostile anti-gender propaganda era in Hungary, CEU has been a safe place where the topics I've been working on have always been considered relevant and acknowledged,” reflects Redai.