Illiberalization and the (Ab)Use of the Public Sphere

The second roundtable of our “Probing Democracy” conference addressed the concept of the public sphere, which plays a central role in democratic theory. Until recently the idea of strengthening the legal-institutional autonomy of a social sphere between the domestic realm and the state was thought to deepen democratic systems. The digitalization of the public sphere changed this picture radically: what is still commonly imagined as a sphere where autonomous individuals can organize and debate is today populated with unprecedented technologies of surveillance and social control used by public and private actors to alter narratives, identities, choices and policy preferences.

The roundtable, moderated by Zselyke Csaky, Research Director for Europe and Eurasia at Freedom House and a Fellow at the CEU Democracy Institute’s Center for Media, Data, and Society (CMDS) examined the challenges that these transformations pose for collective deliberation, political participation and solidarity in democratic societies. 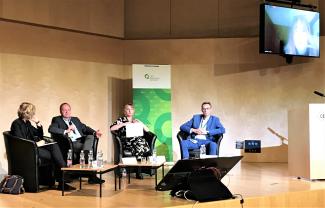 Concerns over bots and AI

Balazs Vedres brought to attention two phenomena which cause him concern. First,

the prevalence of fake bots radically alters the public sphere

since there is no longer a 1-1 “person-voice” ratio. The manner by which one side speaks about a topic can silence dissenting voices, meaning humans can create bots which shape the narrative in the way that actual humans have little chance in arguing against. Because bots can be indistinguishable from real people, this is a major issue particularly when hate speech is involved. Recently, Karsten Müller and Carlo Schwarz published the article “Fanning the Flames of Hate: Social Media and Hate Crime” which showed that online hate speech groups can lead to offline violence.

“the profound transformation [of publics] will come from the transformation of human-to-human ties when we are thrown together with artificial agents in collaborative networks.”

The importance of the online public sphere

Until five years ago, political discourse in the online public sphere was not believed to be as serious as the offline sphere, even though the internet provided a forum for which people could meet in heretofore impossible numbers since no geographic or logistical barriers existed, according to Siân Brooke. Now, with the rise of the alt-right movement and their unique use of social media, academics are paying attention to this discourse. It was not academics, she noted, who began researching this topic, but rather investigative journalists.

by those who know it is untrue, as well as misinformation by those who believe it to be true. It is vital that democracies address the spread if disinformation, which dates back to the 1880s and is not a new phenomenon, but the internet has exacerbated its impact. Although disinformation can be perpetrated by governments on a large scale, it also importantly exists on a smaller scale, such as in the spreading of memes and jokes. “The peculiarity of internet culture and its wide reach can mean that

it leads to grand political consequences,

which have their origins in trivial and easily dismissed jokes.”

In order to maintain stability,

abusing the public sphere both online and offline is crucial for autocratic regimes,

explained Carsten Schneider. According to the literature on authoritarian or autocratic survival, this is done via three pillars: repression, co-optation, and legitimation.

Repression can by imposed in a “hard” way (physically harming and jailing enemies) which reports by the public sphere must either deny or justify, and in a “soft” way (character assassination and getting dissenters fired from their jobs) when, by legally disintegrating critical media, the government does not have to address any accusations.

Co-optation is done formally (buying up independent media) and informally (establishing friendships/partnerships with the media and perhaps starting a media school) which combine to achieve the goal of total message control by the government.

Legitimation comes in two forms: performance and ideological. Performance legitimation must be established by economic growth and creating the image that everything is working smoothly, as evidence to the contrary is blamed on outside actors and issues the nation faces are blamed on external enemies. Modern autocrats are creative with ideological legitimation, because the old forms of legitimation (ex. fascism or communism) had to be reinvented. This is where the public sphere plays a particularly important role. Examples include the concept of a “chosen nation” and re-writing history to include undefined external enemies.

“The scale, speed, and precision of individual targeting is unprecedented,”

which means that autocrats utilizing these three pillars to maintain stability are able to do so more successfully than those before the age of social media, but he stressed that the offline sphere is still of equal or more importance than the online sphere.

The responsibility of business models

Kate Coyer detailed the impact of social media platforms’ business models and privatization using Facebook as an example. She believes that the

tech companies’ surveillance-based business models are responsible for the distortion of the public sphere,

rather than just the content and content-makers, and that this is one of the greater threats to democracy. Micro-targeting ad models are why Facebook is unable (or unwilling, as there is no incentive) to curb the tide of disinformation, extremism, and bots, since the algorithms encourage and reward engagement.

Surveillance capitalism, according to Shoshana Zuboff in “The Age of Surveillance Capitalism: The Fight for a Human Future at the New Frontier of Power,” started with Google during an era when government regulation was considered to be a drag on innovation. After 9/11, Western governments supported the opaque nature of surveillance technology in order to achieve their goal of “total information surveillance.” Therefore, the issue we face today is not just the prevalence of hate-speech online, but also the systems which reward such content.

“the regulation of speech has been transferred from states to private companies.”

Social media conversations, she added, must be reframed to one about the regulation of business models. Direct surveillance happens “because private industry makes it possible,” and governments increasingly rely on these private companies (e.g., Palantir) to provide surveillance capacity and spyware.

Zselyke Csaky then asked the panelists to suggest their solutions to the aforementioned issues. Carsten Schneider advocated for an increase of exposure when companies like Facebook harm the public, alternative funding for local newspapers, decomposing Facebook and Twitter, and that the threats to democracy which exist now on social media have always existed.

Siân Brooke explained that the enforcement of online rules are not equally applied across political groups and therefore the enforcement cannot be “de-politicized”, that there must be more local knowledge from around the world when developing media, and that average citizens should be more involved in the development of technology rather than the current top-down approach, rather than the current approach which gives control to the “leviathan of tech."

Balazs Vedres added that autocracy is under threat by democracy, so the solution is to add more a more democratic approach to technology platforms in order to increase the threat against autocracies.

Finally, Kate Coyer recommended an increase in “design justice” and building better technology, rather than relying so heavily on Facebook and Twitter, noting that