We are pleased to announce that Professor Renata Uitz is to take up the position of Co-Director of the CEU Democracy Institute from 1 February 2022, joining Co-Director Professor Laszlo Bruszt. 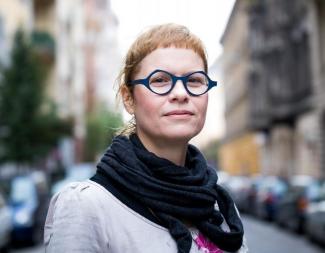 Her most recent book publication is the Routledge Handbook of Illiberalism, co-edited with Andras Sajo and Stephen Holmes (Routledge 2021). Her other books include the co-edited volume Critical Essays on Human Rights Criticism (Eleven 2020). Her book (co-authored with Andras Sajo) The Constitution of Freedom: An Introduction to Legal Constitutionalism (OUP 2017) received the CEU Award for Outstanding Research in 2018.

Currently she is a co-PI in the Jean Monnet Network BRIDGE that explores how four intersecting crises (including Brexit and the rule of law crisis) shape the future of the European Union. She studies the trajectories and effects of the EU's rule of law crisis, the resulting shifts in the roles (and powers) of European institutions and the differentiation in EU governance such changes trigger. As a co-PI in the multidisciplinary research network investigating the origins and iterations of illiberal constitutionalism in East Central Europe, funded by the Volkswagen Stiftung (2021-25), her work traces the emergence of illiberal Christian democracy in the EU on the heels of domestic constitutional and policy changes.

She brings to the Democracy Institute her long experience of academic service which includes chairing the Comparative Constitutional Law program at the Department of Legal Studies for over a decade, two terms as head of the Department of Legal Studies, two terms on the CEU Senate and membership on several university committees. Renata is equally committed to outreach and public engagement: between 2013-2021 she was co-director of the annual CEU summer course on Constitution-building in Africa, previously she worked on legal education reform in Myanmar and in Russia, leading international teams in multi-tier peer-to-peer capacity building projects in fragile political contexts.

"I am honored to join Laszlo at the helm of CEU Democracy Institute. His and Eva’s leadership has built solid foundations for a world-class intellectual hub. I am excited about furthering DI's interdisciplinary research agenda and fostering a global network with a view to halting democratic backsliding and the normalization of illiberal constitutionalism that it brings,"

Our Co-Director Professor Eva Fodor will continue from 1 February as Pro-Rector for Foresight and Analysis at CEU. We are very grateful for her contributions to the Democracy Institute and the University during her time in the role, and wish her great success in her new position.

January 25, 2023
Zsolt Cziganyik, Judit Banhazi: The Cyclical Nature of History, According to Anthony Burgess in the Light of the Augustinian–Pelagian Dichotomy of the Wanting Seed
January 25, 2023
Andrea Peto on Similarities Between Hungary and Israel
January 25, 2023
Laszlo Kontler on CEU in Budapest
January 25, 2023
Call for Applications: Invisible University for Ukraine, Spring 2023
January 25, 2023
Filip Milacic: Do European Voters Cling to Democracy Under All Circumstances?