Robustness of the Rule of Law: Past and Present

The fourth roundtable of our “Probing Democracy” Conference, organized by the Democracy in History and Rule of Law working groups, discussed how historical lessons about the Rule of Law may explain its current state and even affect its future.

The panel consisted of Marta Bucholc (University of Bonn), Petra Bárd, (ELTE/CEU/DI), Kolja Raube (KU Leuven), and Marc Lazar (Sciences Po, Paris), with Barbara Grabowska-Moroz (DI) as the moderator. From the beginning, she asked the panelists to end on an optimistic note – a request that was difficult to accommodate. The panel convened in the shadow of the previous day’s  Polish Constitutional Tribunal decision, which declared several aspects of European law, which are intrinsically linked to the CJEU’s Rule of Law caselaw, to be incompatible with the Polish constitution. 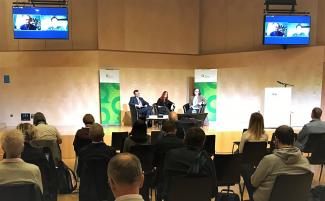 The conflict between the Court of Justice and the Constitutional Courts

The Constitutional Tribunal’s decision, Raube noted, has brought into the limelight the much older conflict between the German Constitutional Court and the Court of Justice that until recently attracted interest mostly from lawyers concerned with the intricacies of who holds the competence of interpreting EU law, and to what extent. Raube stressed that the spillover effects of its jurisprudence cannot be denied and

called upon the courts to perceive themselves as the political actors they in fact are.

Bucholc agreed with this, calling for an end to the aesthetization of the conflict with populist Member States. Alluding to Wojciech Sadurski, Bucholc called the OMT decision “the end of the illusion of good behavior” of the old Member States:

“There is no good or bad behavior, but there should be politics.”

Bárd, too, indicated the extent to which the Polish Constitutional Tribunal borrows from the rhetoric of its German counterpart; however, she also pointed to the populist rhetoric of the Tribunal which questions the loyalties of the Ombudsman to the Polish people. In this rhetoric, she argued, the differences between the two approaches become apparent, which probably should be seen as a warning of a conflation of their respective positions.

The populists and the EU’s reaction

The populist rhetoric of identifying as the “real democrats”, as Marc Lazar noted in his presentation, is the common element that unites the modern populists and distinguishes them from earlier ones:

This self-styling should not be taken at face value, as it goes hand-in-hand with a rejection of democratic institutions.

He demonstrated this with the reaction of the Lega and Cinque Stelle, two populist parties in Italy, when Italian President Sergio Matarella rejected their first attempt at forming a government. Their attacks denied his legitimacy arising from his election by electoral college and the constitution by claiming a stronger popular mandate after winning the 2018 parliamentary election. In this rejection of any counter power to the proclaimed popular sovereignty, he considered these populisms as inherently authoritarian.

The shallowness of the populist claims to represent democracy was also stressed by Petra Bárd with reference to the regression of Hungary and Poland in the numerous democracy and Rule of Law indices. The names used for these regimes, such as “constitutional populism” or “abusive constitutionalism,” are themselves oxymorons. This, she pointed out, poses a considerable problem for the legitimacy of the European Union in general. Not only does the participation of authoritarian countries in the Council and the questionable legitimacy of the election process for their Members of the European Parliament call into question the legitimacy of EU legislation, but

when courts in other Member States refuse to cooperate with politicized courts due to concerns of being complicit in human rights violations. Raube highlighted a further concern for the European Union in the intrinsic connection between integration and democracy: integration, he stressed, needs democracy, human rights, and the Rule of Law for its legitimacy, even if they remain reference points rather than competences.

The question is then:

why is the European Union so slow to respond to these developments?

Bárd argued that while the “ruling by cheating” approach and the use of constitutional language by populists may have concealed their agenda in the past, the Article 2 decisions of the Court of Justice have torn away this mask. The tools, she emphasized, are there not in the less-than-useful Article 7, but rather in the infringement procedures. She urged the Commission to employ these instead of leaving Member States to do so.

However, Raube pointed out that

the Commission will always be more likely to go ahead with the integration project and keeping the Member States on board.

It may keep them in line using sanctions, but is more likely to prefer containing instances of de-democratization within the institutional setup than to move towards differentiated (democratic) integration.

As for the other Member States, Bárd decried the lack of politization of democratic and Rule of Law regression in the populations. She compares the reaction in Germany to the election of Thomas Kemmerich as Prime Minister of Thuringia with votes from the far-right AfD to the (lack of a) reaction to the election of Ursula von der Leyen as Commission President with the support of both Poland and Hungary. Whether this is prone to change if the public is made aware that these regimes are financed with their taxes, as Bárd advocated, or with a (potential) new German government with fewer ties to Fidesz (the Hungarian governing party), as Raube speculated, remains to be seen.

Robustness of and optimism about the Rule of Law

In light of these considerations regarding the response of EU institutions and Member States to the Rule of Law crisis, what can be said about the robustness of the Rule of Law? And what is left of the optimism that Grabowska-Moroz pleaded for?

whether the Rule of Law is fragile and to be handled with care, or anti-fragile and something that should be tested.

She invited the audience to search for the answer not only on the macro-level, but also in the actors’ habitus, the structures and experiences that lead to such divergent attitudes. Why do some courts let themselves be corrected, why do others not? A field in which she sees much work that needs to be done is historical research. For Raube, the historical evidence in Europe, particularly in Germany, clearly suggests that at least democracy is something fragile.

But Lazar points to Italy as a counter example. Italy, he argues, is commonly considered a weak democracy. But it also shows that

democracy has a capacity of resistance and absorption to populist challenges:

both the Cinque Stelle and the Lega are now, after their brief coalition government, internally divided between institutionalists and anti-institutionalists, supporters and opponents of government participation. And after a long and arduous history, there is great respect in Italy for institutions such as the Office of the President (if not the presidents themselves) and the constitution – which has support even from the Italian communist party, a peculiarity in Europe.

The question of the robustness, it seems, remains for now unanswered. The panelists made clear that the answer to this question is something that should also be sought in history, a history that gives us examples of both robustness and fragility. These fresh perspectives are very welcome in a debate that is often dominated by legal arguments and judicial constructions. That the answer remains contested is both in the nature of the question and evidence that additional research remains to be done.