On June 24, the CEU community and special guests gathered in the Museum for Applied Arts in Vienna to inaugurate the University's sixth President and Rector, Shalini Randeria.

American-born Indian social anthropologist/sociologist Shalini Randeria has had a distinguished academic career at institutions of higher education across Europe. She was Rector of the Institute for Human Sciences (IWM) in Vienna and Professor of Social Anthropology and Sociology at the Graduate Institute of International and Development Studies (IHEID) in Geneva, where she was also Director of the Albert Hirschman Centre on Democracy. She holds the Excellence Chair at the University of Bremen, where she leads a research group on “soft authoritarianisms”.

Currently she is Deputy Chair of the Class of Social and Related Sciences, Academia Europaea; Distinguished Fellow of the Munk School of Global Affairs, University of Toronto, Canada and Distinguished Visiting Fellow of IIASA, Laxenburg, Austria; serves on the Board of European Forum Alpbach and is Member of the International Advisory Panel on Population and Development, UNFPA EECA group. She has served more recently on the CEU’s Board of Trustees.

“We are most fortunate to welcome a President who is a world-reknown scholar on democracy and civil society,” our Co-Director Renata Uitz said at the inauguration. 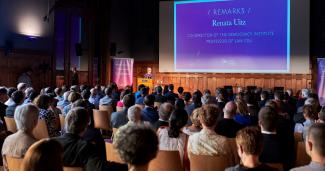 “CEU’s Vienna campus was founded as a sanctuary for critical thinking amidst a global wave of autocratization. The decision to open the Democracy Institute in Budapest is not a mere gesture of defiance — it is a reminder that democracy is a fragile theoretical and practical construct. The stakes of our research are highlighted by Russian aggression in Ukraine. And we are committed to doing our best work in the face of a frontal attack on liberal democracy and open society,” she added.