Timothy Garton Ash: The War in Ukraine and the Future of Democracy in Central Europe

A few days before the Hungarian elections, Historian and political writer Timothy Garton Ash, Professor of European Studies at the University of Oxford, delivered a talk at the CEU Democracy Institute on the war in Ukraine, its impact to the region, and the political situation in Hungary.

Timothy Garton Ash thinks that the debate that attributes “everything wrong in the world” to the West is “extremely frustrating.” He said that the NATO enlargement cannot be a justification for this war, and it is naïve to think Vladimir Putin would have looked peacefully at an independent Ukraine without it.

He also stated that the fundamental mistake of the West was to anticipate that Russia, the motherland of the largest European empire would have given up ex-Soviet territories so easily. The war was a post-imperial reaction and evidence of Russia’s fear of democracy. He highlighted that Ukraine’s Orange Revolution in 2004 intensified Russia’s distrust of democracy and its growing proximity to her borders.

He also reflected on liberalism saying, “The necessary self-criticism of liberalism where the majority tends to think of freedom as a process, not a struggle.

As history proves repeatedly, freedom must be fought for every day, and in today’s age, Ukraine is an ever-present reminder of this struggle.”

It is important to study the course of the war now so that we can influence the outcome and President Volodymyr Zelenskyy is clear as to how the European Union can help: by providing weapons, enforcing sanctions against Russia and a prospective EU membership for Ukraine. While the EU has provided military aid and placed sanctions to support Ukraine, there is still a lot more left to be done, “notably an oil and gas embargo.” However, Hungarian Prime Minister Viktor Orban is quite opposed to both these suggestions, as is Italy and Austria, Timothy Garton Ash said. Germany is not in favor of sanctions either since Russia is their primary importer of oil and gas.

Talking about the consequences of the war, Garton Ash highlighted the strategic value of Central Europe. It was supposed to be an amalgamation of the values of the West (democracy) and the culture of the East. Orban’s governance is intrinsically against this ideology, and the Central European context has changed drastically in the past year or so.

“The Ukraine war is terrible, but at least it has united the West again,”

he argued. This optimism may be short-term lest Europe chooses a path to proceed. Garton Ash presented two paths: the “new Jalta path,” which objectively accepts the future of division, or the realistic idealist path, or “Helsinki” path, which holds on to an ideal end goal of unity, which would accept that the cliché of German Ostpolitik, according to which security can only be achieved with Russia, was fundamentally mistaken.

The first path, and the path that he believes Europe would be more likely to follow, is that EU leaders (particularly from Western Europe) would face a bundle of challenges: lending serious consideration to the measly defended Eastern frontier of NATO, the possibility of the USA going Trumpian again, which shall force Europe to reinforce its own defense; economic circumstances due to Covid-19 and the war such as soaring inflation with very high levels of public and private debt; political circumstances like the Renaissance of populism, and the challenge of addressing climate change while securing energy security from Russia. 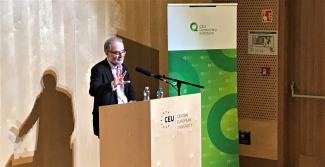 Considering these circumstances, EU would accept “a rotten piece in Ukraine,” which Garton Ash called “a Munich settlement,” if it stops the war. There would be no EU membership for Ukraine, simply because Ukraine shall remain frozen in conflict for the near future, and this would place ex-Soviet states in a limbo between the East and the West. This would also reinforce cultural stereotypes that plague the divide between Eastern and Western Europe, and would be increasingly widespread.

He wishes Europe embrace the latter path, but admitted it is unlikely. The key to putting this path into motion would be to accept Zelenskyy’s plea for EU membership, which has been dodged down by France and Germany for the past decade. Should this plea be accepted, the same outcome would be expected for Moldova, Georgia, Belarus, and the Western Balkans including Bosnia.

Accession conditionality for the EU is the most powerful instrument the West holds to see a favorable outcome of the war, and consolidated democratization across the Union. He emphasized that while an accession conditionality would help the EU’s cause, so would a post-accession conditionality, whereby no tolerance for an authoritarian, hybrid-dictatorship should exist. In the history of the Union, widening has always led to strengthening and this would still hold up in the case of Ukraine.

He also highlighted the impact of the Hungarian election on the war, questioning whether leaders whose loyalties lay with Russia and China would have the best interests of the Union in mind. He concluded by saying that “democracy in Central Europe depends on the larger strategic choice that I outlined, but

the larger chance of restoring democracy also depends on the agency of East Central Europeans, not least Hungarians.”

The lecture has also been covered by international media. You may read a summary in Hungarian by Magyar Hang here. Following the lecture, Timothy Garton Ash has been interviewed by 444.hu (read it in Hungarian here) and Corriere della Sera (read it in Italian here).

Ukraine’s Integration and Reconstruction: How To Prepare the EU?

January 25, 2023
Zsolt Cziganyik, Judit Banhazi: The Cyclical Nature of History, According to Anthony Burgess in the Light of the Augustinian–Pelagian Dichotomy of the Wanting Seed
January 25, 2023
Andrea Peto on Similarities Between Hungary and Israel
January 25, 2023
Laszlo Kontler on CEU in Budapest
January 25, 2023
Call for Applications: Invisible University for Ukraine, Spring 2023
January 25, 2023
Filip Milacic: Do European Voters Cling to Democracy Under All Circumstances?