The third roundtable discussion of our “Probing Democracy” conference focused on inequality, social justice, the environment, and the combination of those with democratic governance.

Co-organized by the Inequalities and the Environment and Democracy workgroups, the panel featured Christian Brethaut (University of Geneva), Cristina Corduneanu-Huci (CEU/DI), Erik Swyngedouw (University of Manchester) and Guntra Aistara (CEU), and was moderated by Eva Fodor, Co-Director of the CEU Democracy Institute. 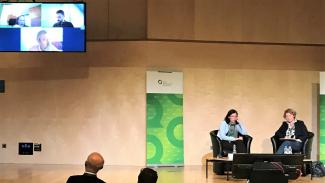 Regarding the question of democracy and the environment, Eric Swyngedouw pointed out that

For instance, emphasizing the democratic notion of equality rather than the terms of social injustice or environmental injustice, he referred to the particular ways in which environmental problems are addressed that leads to depoliticization. This depoliticization is followed by an overemphasizing of techno-managerial adjustments which fundamentally keeps existing socio-ecological inequality and injustices intact. As an example, he cited fossil-based versus sustainable vehicles, whose lithium batteries undermine, among others, the access to healthy water in Chile where lithium is mined.

Cristina Corduneanu-Huci agreed with him on the point of politicizing access to water and energy. Moreover, she highlighted

and the incoherent reduction of it in the Paris Agreement. Furthermore, and agreeing with the problem of lithium, she pointed to the many technological solutions (e.g., biomass or bioenergy) that create their own inequalities, addressing the question of water and land as a public good. Finally, the green narrative or “Green Growth” has been promoted by governance, however it is not necessarily contributing to the reduction of inequalities, she argued.

Pointing to the food-water nexus and the importance of environmentally-friendly and innovative techniques, Guntra Aistara talked about the change that EU accession brought to organic farmers in Latvia which led, for instance, to heightened inequality within the EU and between Eastern and Western Europe. As such, she asserted that

the harmonization of laws was not harmonious at all for new countries that joined the EU because of the power dynamics which occurred during the negotiations.

Moreover, she referred to the “conventional wisdom,” of international conventions which influence knowledge politics and the subjectivity of people who try to be environmentally friendly. For instance, innovative environmentally friendly creations are not subject to subsidies (agro-environmental payments) when they don’t fit into the required boxes that are set by “conventional wisdom.” This re-enforces a reliance on “expert knowledge” and causes farmers to question their own knowledge and motivation for ever having changed their mode of operating.

justice traps can lead to democratic deficits and the loss of effectiveness,

she argued. For instance, too much reliance on benefits which farmers now have access to can transform them into neo-liberalized producers. This makes them economic actors rather than being part of a holistic identity of people who live in that region, and who interact with environmental elements in ways that could be a model for others.

Focusing on existing integration processes taking place at the regional level, and the variables which help us understand why shifts in the level of integration of government systems happens, Christian Brethaut explained the Water-Food-Energy (WFE) nexus. In relation to water, food, and energy allocation,

it is critical to recognize and embrace existing power relations and balances in order to understand ongoing tradeoffs and to envisage possible futures.

Furthermore, the exchange of narratives including the diversity of smaller, powerful narratives is a key aspect which needs to be measured and analyzed. Christian Brethaut believes that scientists, and especially social scientists, have an important part to play in this regard.

Hopes and challenges for the future?

Christian Brethaut sees the future rather optimistically by positing that current movements are the driving force to put these questions on the agenda to find new solutions. Moreover, he believes the role of scientists is to frame these issues in the most objective way possible, as well as to engaging in the framing of policy processes.

Guntra Aistara highlighted the issue of information and whether or not information actually reaches everyone and makes a difference. In this regard,

figuring out how to reach people, especially those who promote fake news, is a central question.

On the contrary, Cristina Corduneanu-Huci depicted a darker future by saying that hope is paradoxically coming from bad things that will happen in the future, in a similar way as the economic crisis in 2008 led to a new type of politization. She outlined the deep connection between the environment and financial markets and the question of green growth as a luxury which only industrialized countries have.

Finally, Eric Swyngedouw was both pessimistic and optimistic by mentioning, on one hand, the large number of people in the global North and South who are organizing and fighting for something different. According to him this is new, as groups like the “Indignados” in Spain, Extinction Rebellion, or Youth for Climate refuse to accept things as they are.

On the other hand, the techno-managerial approach to the ecological issue, such as the sustainable city of Amsterdam where people live in an ecotopian, biotopian bubble,

Hence, inequality will lead, and is already leading, to an astonishing crisis, if we look for instance at mass migration as a social-ecological consequence.