Environment and Democracy will focus on the exploration of democracy’s resilience in the face of current threats from global and local environmental change and the disruptive potential of ecological urgency as a challenge to political systems.  In the 21st century, as we encroach upon planetary boundaries, one of the functions of modern government is to manage human economic activities in a way that increases resilience towards threats both natural and man-made.  The urgency of environmental security is represented by the recognition in public opinion and awareness of steeply rising environmental costs and risks associated with climate change and pandemics.

Given that all forms of government are ultimately judged by context-specific performance factors which relate to human security, the need to manage humans’ relationship to nature has become more and more critical to survival.  At the same time, natural resources combined with human capital are the means to solve these challenges and constitute the fundamental bases for prosperity.  Contests over control of natural resources and the wealth they represent become increasingly fraught in situations of urgency, leading to the potential for conflict.

Recent history has provided examples of how environmental and man-made disasters pose existential threats to governments and ideologies.  The role of the Chernobyl disaster in the public’s loss of trust in systems of authority and the consequential delegitimization of scientific socialism is increasingly recognized in the literature.  Similarly, today’s Covid pandemic confronts governments in the starkest terms and serves as a testing ground for democratic institutions and principles.  Both these game-changing tragedies are environmental in origin.  The response to their impacts in terms of environmental justice serves to highlight other processes such as the muddled global policy response to fossil fuel dependency.

CEU’s Environment and Democracy Work Group is building capacities for research and theorizing in these areas which illuminate major driving forces in the organization of societies and major tests of their legitimacy.

Democracy and other systems of governance have for more than a generation been faced with unprecedented challenges in the form of the “whole-of-society” transformation that is the movement towards sustainable development.  The man-made global environmental challenge has profound implications for the legitimacy and performance of political systems.  The Environment and Democracy Work Group undertakes research to test the assumptions behind politics in its various forms against environmental performance to shine a light on the nexus at the heart of these debates through investigations in areas such as: environmental democracy (access to information, participation and justice in environmental matters), environmental rule of law, environment and security, corporate accountability and corporate social responsibility, and governance of the global commons.  These areas of research are described in the following clusters.

This cluster investigates the complex interrelationships among performance in the face of environmental change and democratic governance and the implications for values, traditions and understandings about the governance of societies including democracy itself.  Environmental challenges require an all-of-society response.  Thus, they provide rich ground for comparison of different forms of social organization against performance measures, including an expanded understanding of environmental justice related to the concept of slow violence. The scope and extent of the transformation to sustainability is still being explored.  How can it be achieved where publics and polities are sharply divided? Does populist democracy inhibit transnational cooperation and pluralistic, inclusive and just measures and thereby constitute a threat to sustainability? Will poor environmental performance delegitimize populism?  Are there parallels with the delegitimization of scientific socialism following the Chernobyl disaster?  How are entrenched interests threatened with the loss of power and influence to be accommodated?  How can we look beyond the rhetoric to the actual causes of division and the meaning behind attempts to delegitimize liberal democracy?  How can current divisions be overcome, and trust built to cooperate and achieve good governance where vital common interests are at stake?  The environment is one area that has been a subject for cooperation even in the face of wider conflict, even in wartime.  Can this area of common concern and common interest continue to be an arena for conflict reduction in a civil context through democratic governance?  And what about the role of business?  Through an examination of “environment, democracy and wealth,” corporate accountability and corporate social responsibility are also covered as research areas under this rubric.

Human Security and Humanitarian Limits to the Sovereignty Model

The other side of the coin, this cluster investigates the interactions among sovereignty, the progressive development of international law including diffusion of new environmental norms and norms related to human dignity, and alternative international legal actors as repositories of environmental justice.  Going hand-in-hand with the formation of various types of transnational networks that pose a challenge to traditional governance structures, the state-centric international legal order has been facing a crisis of authority and legitimacy.  Sustainable development has given rise to a “sovereignty-plus” model of global environmental governance involving the multi-stakeholder approach and the intentional sharing of the international sphere with non-state actors, as demonstrated by the “all-of-society” approach in the Sendai Framework on Disaster Risk Reduction.  This research area examines issues related to democratic legitimacy of non-traditional formations, dynamics of community and network formation, and new constellations of authority.  Questions include: If states have less natural authority with respect to emerging issues of global common concern, from where are new notions of power, legitimacy and authority arising, and what role do global networks based upon hacktivism or terrorism play?  Does the implicit acknowledgment of the limitations of the Westphalian order in solving problems of the global commons and transboundary shared natural resources apply with the same force to environmental security and justice problems?  Does the labeling of environmental issues in terms of security increase the likelihood that states will be considered as the appropriate vessels for power and authority in tackling the challenges, or on the contrary will the environment-security nexus bring into question the states’ monopoly on security?  Does securitization of the environment (and association of migration and terrorism with global environmental change) tend to remove democratic governance and legal controls?

The massive mobilization of resources under the rubric of Green Deals raises the stakes in the environment and democracy field.  This area of research examines citizen assemblies, citizen science and other aspects of democratic governance in the implementation of the Green Deals and as an outcome of Green Deal implementation. It looks in particular at empowering citizens towards capacities for citizen deliberation and participation for Green Deals.  Citizen science has amazing potential for environmental governance, while media disinformation is particularly dangerous where environmental hazards are involved.

Democracy and Environmental Rule of Law

“Environmental democracy” is a term that former UN Secretary-General Kofi Annan coined to describe citizens’ use of civil and political rights to advance their interests in an area of fundamental importance – that is, the very conditions of existence in the form of a decent and healthy environment for present and future generations.  Without a healthy environment, not only is the potential use of human rights impinged, but the very right to life itself may be threatened.  In international law and policy, the operationalization of environmental democracy principles is largely carried out through the application of Rio Declaration Principle 10 and SDG 16.  States have employed a regional approach to these principles through the elaboration of two major conventions in Europe (Aarhus Convention) and Latin America and the Caribbean (Escazú Agreement).  European Union environmental policy is grounded in environmental democratic governance as well.

The field of environment generally is a laboratory for participatory democracy. Democratization has been both a contributor to environmental crisis and a source of solutions.  In the wake of Chernobyl, New environmental policy instruments (NEPs) (including public participation and market-based instruments) won the battle of hearts and minds in meeting the challenges of acute environmental pollution. But how must they be modified or augmented to meet resiliency needs in a new paradigm?  What are the parameters of the “post-NEP” policy response to address challenges arising from global environmental change? Where NEPs have been shown to be successful on the local level, what kind of higher level of decision-making can be developed to aggregate local solutions without discouraging pluralistic democracy and participation itself?  Anniversaries of major milestones in the development of norms related to access to information, public participation and access to justice in environmental matters offer opportunities to examine their practical application and implementation and to assess fitness to respond to evolving issues, including the increasing politicization of policymaking related to climate change and the environment. Among them are the 30 years since the adoption of the Rio Declaration and 20 years since the entry into force of the Aarhus Convention.  This research area includes 20 Years of the Aarhus Convention, a stellar webinar series (Aarhus 20th anniversary conference) leading to a book.

This research cluster also examines governance aspects of complex integrative planning and decisionmaking and assessment frameworks as well as environmental governance lacunae such as the voluntary approach to corporate accountability and corporate social responsibility.  Among the frameworks examined are the Water-Energy-Food-Ecosystems Nexus, EIA/SEA, and environmental governance assessment, for example through a proposed research project, NEXUCCESS (Nexus of Climate Change and Ecosystem Services).

The democratic aspects of global environmental governance are tied to the 50 years of practice of stakeholder engagement under UNEP, including the Major Groups and Stakeholders approach. DI is leading a project on “The UNEP We Want,” a report based on surveys, interviews and statements involving MGS on UNEP’s first 50 years and on the expectations of civil society for UNEP’s role in the future.  The report will be launched in time for the official UNEP@50 commemoration in conjunction with the Fifth United Nations Environment Assembly in 2022 and will be a background document for the Stockholm+50 Conference later the same year.  The project will also provide an opportunity for research and analysis regarding developments with respect to UNGA Res. 73/333 related to the Global Pact for the Environment.

The Duty to Protect the Environment

Liberal democracy entails both rights and duties.  A political system can be said to be good if it guarantees people freedom and liberty, while maintaining responsibility and accountability for harm.  Almost 50 years ago the international community adopted Principle 1 of the Stockholm Declaration, which talks not only of a right of present and future generations to a healthy environment, but also of the duty of all to protect the environment.  The duty to protect the environment is aimed in turn at upholding the necessary conditions for a life in which human beings can realize their full potential and in which humankind may explore new horizons and solve pressing societal problems, leading to flourishing cultures.  The parameters of this duty relate to issues such as intergenerational equity, dignity rights, stewardship, public trust and non-regression.  The duty can only be carried out in a system free from corruption and the kind of ‘slow violence’ it entails, which can guarantee equitable access to natural resources.  Recognition of a responsibility to protect nature has been mirrored in recent times by recognition of the rights of nature, which may come in conflict with traditional democratic notions. 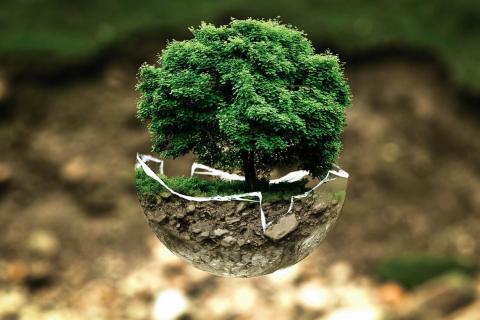 We are happy to announce that the Horizon2020 project, REAL_DEAL was approved. Our Environment and Democracy workgroup is a consortium partner in this EUR 6.8 Million project led by Trilateral Research and European Environmental Bureau.